From left to right: Former CEO and Chairman of the Board of the Museum of Flight and Vice Chair of the Gala, Michael R. Hallman, President and CEO of The Keller Group, Lee Keller, and Mary Kay Hallman

Congratulations to the Museum of Flight on 50 years of educating the public and growing into the foremost air and space museum in the world! To honor this achievement, the First Fifty Gala took place in late June and raised $1.7 million for The Museum of Flight. Our Keller Group President and CEO Lee Keller was excited to be a part of the celebration as the Museum has been our valued client for more than 4 years.

More than 800 guests entered the museum on a red

carpet, where they had pictures snapped and enjoyed music by The Harry James Orchestra conducted by Fred Radke during a cocktail reception, which took place in the Museum galleries right under the wings of the Museum’s iconic planes including Boeing’s first plane and the retired Blackbird.

Following the reception, everyone moved into a large tented area situated just outside the museum for dinner and a live auction and entertainment. Famous music composer and producer, David Foster and his friends were the main headline for the evening including Babyface Edmonds, Seattleite

Kenny G., and, to everyone’s surprise, actor and comedian Sinbad. These four and a several talented local artists kept the crowd entertained well into the night.

“I loved the fact that the talent was varied and great and from all different genres. Sinbad the comedian! Kenny G, the iconic sax player, many unknowns but incredibly talented people like an amazing violin player from Seattle, a tenor singing Italian opera that made men in the audience weep and the 3 young women who were incredible singers who had just graduated from Aviation High School,” said Lee Keller. But my very favorite has to have been David Foster. Few musicians have had their fingerprints and creative genius on as much music as he has from being a musician, songwriter, composer, arranger, producer and even recording artist. Plus, he’s funny and witty and adorable!

In addition to the entertainment, the evening’s festivities included a live auction. Among the items up for auction was a postal cover bearing the Apollo 11 insignia, postmarked July 16, 1969. The item was donated by Mark Armstrong, son of astronaut Neil Armstrong. Valued at $20,000, the cover sold for nearly $150,000!

As quoted in Patti Payne’s piece in the Puget Journal, “That set a record. That’s the most any of them have ever sold for, ever!” said Fred Northup, the Gala’s charity auctioneer.

From left to right: Honorary Chair of the Gala, June Boeing and retired Alaska Air CEO and current Chairman of the Board of the Museum of Flight, Bill Ayer
Photo: Patti Payne

June Boeing, the honorary chair of the event and widow of William E. Boeing Jr., son of Boeing founder William Boeing, attended and was honored for her continuing support of The Museum of Flight.

With exceptional entertainment, food, an auction 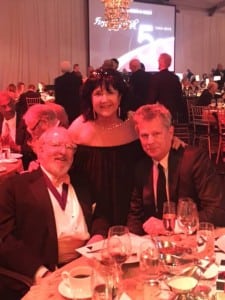 of priceless items and great people, the First Fifty Gala was one for the books.

“It was really wonderful. I’ve been to so many galas and big events over the years from London to D.C. to Seattle and this one was in the top 5,” said Keller. “It was a perfect evening made better only by being there with my mother, Patti Payne, who was on stage with the auctioneer. As the music started, she texted me and said, ‘You have to come up here and sit next to me at the stage.’ I happily did and loved being an arm’s length away from a very memorable show with iconic talent next to my mother who raised us with music; such a night to remember.”